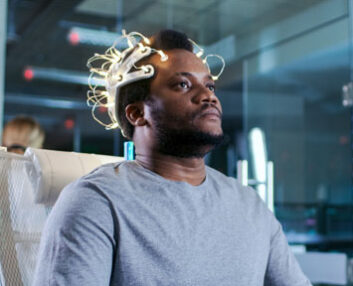 An electroencephalogram (EEG) is a test used to find problems related to electrical activity of the brain. An EEG tracks and records brain wave patterns. Small metal discs with thin wires (electrodes) are placed on the scalp, and then send signals to a computer to record the results.

what is an EEG?

An electroencephalogram (EEG) is a test used to evaluate the electrical activity in the brain. Brain cells communicate with each other through electrical impulses. An EEG can be used to help detect potential problems associated with this activity.

An EEG tracks and records brain wave patterns. Small flat metal discs called electrodes are attached to the scalp with wires. The electrodes analyze the electrical impulses in the brain and send signals to a computer that records the results.

The electrical impulses in an EEG recording look like wavy lines with peaks and valleys. These lines allow doctors to quickly assess whether there are abnormal patterns. Any irregularities may be a sign of seizures or other brain disorders.

An EEG is used to detect problems in the electrical activity of the brain that may be associated with certain brain disorders. The measurements given by an EEG are used to confirm or rule out various conditions, including:

A nerve conduction velocity (NCV) test – also called a nerve conduction study (NCS) – measures how fast an electrical impulse moves through your nerve. NCV can identify nerve damage. During the test, your nerve is stimulated, usually with electrode patches attached to your skin.

MNerve conduction studies are done to: Find and evaluate damage to all the nerves that lead away from the brain and spinal cord to the smaller nerves that branch out from them. Help diagnose nerve disorders, such as carpal tunnel syndrome or Guillain-Barré syndrome.